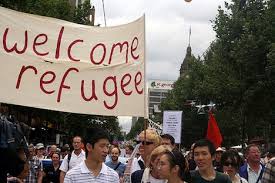 In a memorandum on Immigration, President Obama said up to 70,000 refugees may be admitted to the U.S. during the 2015 fiscal year.  The President stated that this number was well justified due to humanitarian concerns and national interest.

The number of people eligible to receive refugee status is split into an uneven quota by region.  The slots available to people from various regions is as follows:

The State Department can allocate the 2,000 unallocated refugee numbers to another region if the need is warranted but only after notification to the Judiciary Committees of the Congress.